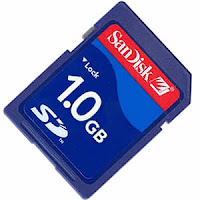 Shares of SNDK have risen ~45% from early June lows (SOX +10%) on improving NAND pricing trends and the correct anticipation of its inclusion in the new iPhone 5. Firm believes these favorable developments are now fully reflected in the stock. Although fundamentals are now moving in the right direction for SanDisk and the NAND flash industry as a whole, weakness in computing trends and supply constraints are leading JMP to trim their previously more optimistic 2012 non-GAAP EPS estimate from $2.10 to $2.00 (Street $1.78). They are also revising down their FY13 non-GAAP EPS estimate from $4.00 to $3.50 (Street $3.07) to reflect lower intermediate-term gross margins that may stem from weaker end markets, Samsung looking to fill excess capacity, and Apple (MP) is coming to represent a greater percentage of sales. They view current SNDK trading levels of 13x PE/ FY13 as appropriate relative to our coverage universe average in the low- to mid-teens.

JMP sees near-term trading resistance ahead of 3Q12 results due to a combination of elevated expectations, recent slowing in NAND pricing improvements, computing end market weakness, and iPhone 5 supply constraints. Although inclusion in the iPhone 5 puts SanDisk in a good position to meet JMP's 3Q12 revenue growth assumption of +21% q/q (Street +17% q/q), they believe this is in the stock and that any wrinkle could weigh heavily on valuation as recently occurred when iPhone component peer Skyworks (MO, $40 PT, PE based) positively pre-announced, but not by enough.

It is likely premature to get overly upbeat on more rational NAND industry supply additions based on Toshiba's mid-summer announcement of a 30% production cut and a recent report out of Korea speculating that Samsung may reduce capital expenditures by up to 50% in 2013. In JPM's view, there is as much to worry over as cheer from the Toshiba moves represent a magnitude of downward adjustment not seen since the great recession. Also, whatever capex decisions Samsung ultimately makes for 2013, it will first have to absorb an almost 50% increase in capex (>$13B) slated for 2012, in the face of losing the iPhone 5 as a demand driver.

Reducing 2013 gross margin assumptions due to the following: 1) to account for recent weakness in computing market trends and our diminished view of Windows 8 and Ultrabooks as near- to intermediate-term SSD demand catalysts; 2) to bake in the potential of Samsung pricing pressures as it absorbs excess capacity; and 3) to reflect their expectation that Apple sales will drive lower than average gross margins due to the inclusion of its own custom NAND controller architecture.,

Notablecalls: I love it when an analyst changes his/her long-held view, especially when he/she has been so right as Gauna has been in SNDK.

He may be right this time around as well. Avian Securities pinged me with the following Friday afternoon:

SNDK feels heavy again today and I want point out our SNDK commentary from us yesterday.... The stock has had a great run as some competitors have discussed “improving fundamentals”.  Other than stable pricing I’m not sure what they are seeing as improving other than more talk from producers saying they’ll cut CapEx (heard that before).  This is the busiest time of year and there is plenty of supply.  I think it’s time to be looking on the sell side of the name...might be a little early but upper end here and here is yesterdays comments.

9/20 NAND - SNDK, Toshiba, Samsung - We are not nearly as excited at NAND as street is right now. Yes iPhone 5 build and other tablet/phone builds have taken up some supply but without any significant dislocation. SSD demand is not where it needs to be this time of year. SD cards / USB drive sales are still awful. While smartphone builds are good, device loading isn’t growing. This should be seasonally strongest time for NAND consumption and at best we have seen flat pricing after a 6 month freefall. Also Chinese New Year upcoming and our contacts point out that this year only represents 4 days for build vs. 7 days last year. Memory users have front loaded purchases. We acknowledge commentary from memory makers around “restraint” regarding capacity additions but we see little in a positive catalysts now until next summer. Pricing is stable right now but dealer and broker feedback points to plenty of availability and short lead times as evidence of surplus supply. We’d be wary of any rally here.

Avian knows the space well and has made some terrific out-of-consensus calls in the past. So now you know what the smart money is thinking.

I expect SNDK to get hit today and in the n-t as these cautious views spread. Gauna plays the SWKS card so well- the stock got hit -25% merely because they didn't produce blow-out numbers. Could easily happen to SNDK.

Would Alex Guana be the same guru that downgraded AAPL in March 2011 when the shares were 350 Usd? They recently traded ar over 700 usd. I find his assessment even more inept on this occasion. SNDK has been sufferring because it previously backed the wrong horses. As AAPL gained market share, SNDK found itself selling less nand to companies that lost market share to Aapl? Now for the first time it is in the iphone so revs will be good. Also, contrary to what guru Guana says the 32gb chip on the teardown appears to be an mcp chip with controller, a total nand solution (HIGH MARGIN PRODUCT).

Great blog post! I am highly agree with the author's way of thinking.
Info removal scenario is often a problem for the individual.
But for the simplicity of end users, researchers have designed a a solution for data corruption challenges.
In case there is a removal of data condition, an individual should've an awareness of appropriate files restoration software.
recover deleted emails

eToro is the #1 forex broker for novice and advanced traders.

I was surfing the Internet for information and came across your blog. I am impressed by the information you have on this blog. It shows how well you understand this subject.สล็อตออนไลน์

Great job for publishing such a beneficial web site. Your web log isn’t only useful but it is additionally really creative too.สล็อต 999

Thank you because you have been willing to share information with us. we will always appreciate all you have done here because I know you are very concerned with our.สล็อตวอเลท

Very informative post! There is a lot of information here that can help any business get started with a successful social networking campaign.สล็อตแตกง่าย

Nice post! This is a very nice blog that I will definitively come back to more times this year! Thanks for informative post.บา คา ร่า วอ เลท

Thanks for a very interesting blog. What else may I get that kind of info written in such a perfect approach? I’ve a undertaking that I am simply now operating on, and I have been at the look out for such info.สล็อตเว็บใหญ่

I wanted to thank you for this great read!! I definitely enjoying every little bit of it I have you bookmarked to check out new stuff you post.บา คา ร่า วอ เลท

Positive site, where did u come up with the information on this posting?I have read a few of the articles on your website now, and I really like your style. Thanks a million and please keep up the effective work.สล็อต ฝาก-ถอน true wallet ไม่มี บัญชีธนาคาร

I think this is an informative post and it is very useful and knowledgeable. therefore, I would like to thank you for the efforts you have made in writing this article.บาคาร่าวอเลท

Great job for publishing such a beneficial web site. Your web log isn’t only useful but it is additionally really creative too.สล็อตแตกง่าย

I wanted to thank you for this great read!! I definitely enjoying every little bit of it I have you bookmarked to check out new stuff you post.สล็อตxo

I would like to say that this blog really convinced me to do it! Thanks, very good post.เว็บสล็อต

Thank you because you have been willing to share information with us. we will always appreciate all you have done here because I know you are very concerned with our.เว็บสล็อตเว็บตรง

Very informative post! There is a lot of information here that can help any business get started with a successful social networking campaign.เว็บตรงสล็อต

Nice post! This is a very nice blog that I will definitively come back to more times this year! Thanks for informative post.เว็บ ตรง

I was reading some of your content on this website and I conceive this internet site is really informative ! Keep on putting up.เกมสล็อต