While everyone is freaked out by Chipotle's (NYSE:CMG) 2013 comps guidance, Baird's David Tarantino is about the only analyst out there that puts it into perspective:

Notablecalls: Not advocating a long here but thought it's worthwhile to highlight this. Looks like CMG has always guided conservatively and then beaten the guide.
Posted by notablecalls at 7:01 AM 2 comments: 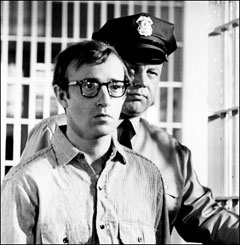 Merrill Lynch/BofA is downgrading Netflix (NASDAQ:NFLX) to Underperform from Buy this morning.

- With the stock up 31% in past two weeks, risks outweigh reward heading into Q3.

Since their upgrade on August 14th, several things have changed that make the firm unwilling to chase this stock after a 31% upward move in the last two weeks, including: 1) Amazon has continued its aggressive content acquisition, buying the Epix content as soon as it came off exclusivity with Netflix thus taking away the most valuable differential for marketing purposes (Epix has the closest thing either company has to recent Hollywood blockbuster content); 2) less comfort in Netflix’s ability to meet even the Street’s relatively low expectations of 6mn net additions to it domestic streaming business; and 3) less acquisition value support at these levels – Amazon is likely content to wait until Netflix is ex-growth in the US and thus cheaper before it considers an acquisition at >$4.09bn (current market capitalization plus some acquisition premium). This quarter reminds them a lot of last quarter, with heavy short covering driving the stock up post quarter end on no or limited news; a set-up the firm doesn't like to see in any hyper-volatile stock like Netflix.

Will it be 7mn, 6mn or 5mn net US streaming ads?
Early this year, Netflix put out a “soft” guidance target of 7mn net sub additions to its domestic streaming business. From their conversations, as well as Street estimates, it is clear that few if any believed this number from the get go and fewer believe it now. Merrill doesn't think the company needs to guide to 7mn net adds for the year (3.5mn in Q4 assuming Q3 is at 1.4mn, the mid-point of guidance), but less than the ~6mn that the Street is modeling could hurt the stock. They see net additions significantly below estimates as the biggest risk to the stock due to: 1) signals Netflix has reached the second inflection point on its penetration curve and 2) domestic streaming subs will plateau sooner than expected, pressuring FY13 ests (they are currently modeling 33mn domestic streaming FY13 subs).

Notablecalls: NFLX is up 17 pts since last Wednesday after the wonderful positive call from Citi (see below) and the relatively ill-timed upgrade from Morgan Stanley yesterday. As Merrill notes, this does remind a lot of last quarter, which ended in a rather painful 20 pt drop in stock price.

In my humble opinion, yesterday's move can solely be attributed to short squeeze as fast money traders attempted to fade the MSCO upgrade. I also suspect many of them ended up covering their shorts by end of day as the stock failed to cave.

These trading dynamics leave NFLX vulnerable to the downside today on the Merrill downgrade.

I'm thinking below $70 level today.
Posted by notablecalls at 7:18 AM 3 comments:

Citigroup is out positive on Netflix (NASDAQ:NFLX) after their survey revealed surprisingly stable and improving customer satisfaction.

Netflix remains one of the most controversial stocks they cover, Citi notes. It’s their “Screaming” Buy --they say “Buy,” people Scream. Risks here remain significant and include: a) Substantial Content Acquisition Requirements; b) Significant Competition; and c) Significant Uncertainty Re: NFLX’s International Investments. But they will stick with their Buy – highlighting what the firm views as a highly reasonable valuation, a generally positive execution track record, and the still early market opportunity for Internet Video Streaming. Three Updates:

1. Latest Proprietary Consumer Survey Suggests Satisfaction Inflection Point — Citi very recently re-ran their consumer survey (approx 3,800 U.S. Internet users, incl. 1,200+ current & 700 past NFLX subs). Key Takes: 1) Overall customer satisfaction with Netflix has begun to improve for the first time since last Summer’s "Apocaflix" – 48% of current NFLX subs are Very or Extremely Satisfied vs. 44% to 45% levels observed in Q1 & Q2; 2) In terms of Online Video destinations, Netflix’s competitive position continues to rise – the % of respondents listing Netflix as a top destination has increased from 25% in Q2:11 to 30% in Q1:12 to 35% today – although YouTube and Amazon are also showing gains; 3) Churn propensity appears to have improved YTD – the % “Not At All Likely To Churn” has reached a YTD record high of 57%; and perhaps most surprisingly…4) The perceived Streaming content selection appears to have improved – 37% believe that Streaming content availability has improved over the last 12 months vs. only 16% who believe it has worsened. 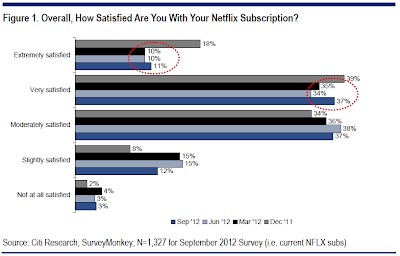 2. Relatively Neutral Q3 Traffic Trends To Netflix.com — Per comScore, Netflix’s U.S. Website visitors have declined 3% Y/Y in Jul & Aug, or a less worse trend vs. Q2’s 7% decline. And, 12.4MM unique visitors visited Netflix via Smartphones in Jul & Aug. That’s 43% Mobile traffic penetration. And a bit of a reminder that as a subscription service, NFLX benefits from Mobile usage growth – better consumer value proposition with no drag on monetization.

3. The Valuation Case – They continue to see NFLX generating almost $5.50 in U.S. EPS in 2013. That means one can buy NFLX U.S. at 10X P/E, with a free call option on NFLX International. That’s highly reasonable, in Citi's opinion.

Notablecalls: As many of you recall NFLX was a $200 stock when last summer's Apocaflix began. Not saying the decline was solely due to Qwikster etc. but with subs starting to accept the reduced level of content offered by the company, the extreme negative sentiment toward NFLX stock may start to fade.

If churn goes down -> net adds go up. And that's what people are looking for. That's material new info that may actually show up next time NFLX reports.

There is always the issue with international expansion but if the U.S. ops can carry the weight while international moves toward profitability, NFLX may indeed become investable again. NFLX seems at least on track to add 6MM Domestic Streaming subs in ’12 off a 22MM base (that’s hard-to-match growth & size);

This call has a fair chance to generate some meaningful buy/cover interest in the stock n-t.

Screaming Buy.. eh. Nice.
Posted by notablecalls at 8:30 AM 3 comments: