Lamar Advertising (NASDAQ:LAMR): Worth $60/share as a REIT - Goldman Sachs 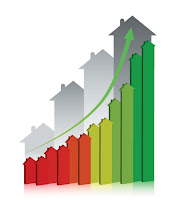 Source of opportunity
Goldman upgrades Lamar to Conviction Buy from Neutral, with 29% upside to their new $42 target price. LAMR expects to receive an IRS ruling on its REIT election in 1Q13 and they see a high probability of approval given a recent IRS ruling that established a billboard REIT precedent. While the REIT conversion is not a certainty (due to digital displays), they find the risk-reward compelling with at least 29% upside if election is completed vs. 15% downside if it falls through. Previous REIT conversions have outperformed and may serve as a template for LAMR. AMT/EQIX are up 75%/90% versus the S&P 500 up 30%/16%, since REIT conversion talk began.

If Lamar does receive REIT conversion in 1Q13, what should investors expect out of the stock? Broadly, Goldman expects the stock to perform better than peers as valuation moves to a REIT framework supported by higher trading multiples. However, given the 20% plus move in the stock since mid July and the deterioration in underlying outdoor advertising demand (same board digital revenue flat in 2Q), they believe the near-term price appreciation may be less muted until the IRS responds. 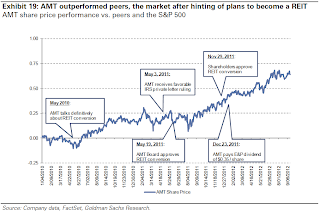 Since American Tower (AMT) announced its intention to convert to a REIT in May 2010, the stock is up over 70% compared with the S&P up 30%. Slightly less than half of that appreciation occurred within the one year period between AMT’s initial discussion of REIT conversion to the favorable IRS private letter ruling in May 2011. From the time that AMT’s board of directors approved the REIT conversion in late May 2011, the stock is up 34% compared with the market up 6%. While LAMR shares are up more than 20% since July, due to REIT conversion speculation, the AMT exhibit suggests that LAMR shares could significantly outpace the market over the next year.

Notablecalls: REIT conversion - the pair of words that gets people excited these days as evidenced by LAMR's 15% jump on August 8 when the company first officially commented on the topic.

The moves produced by EQIX, AMT and WY following REIT conversion news have investors salivating for more. Now we have Goldman saying it's very likely Lamar (LAMR) can and will convert into a REIT, potentially doubling its current valuation.

I suspect investors will not wait for next year to catch the upside. They will move in to buy the stock now. The upside is that big - possibly as high as 100%.

Provided it already traded as high as $35-36/share on the REIT news a month ago, I expect the stock to produce a sizable move on this Goldman blessing.

Thinking back toward $35 today. Use possible pull backs to scale in.

Definitely one to consider as a longer-term hold as well.
Posted by notablecalls at 9:32 AM

This is what happens when people get overly excited. Stock gets bid up too much @ open and plummets. Now it needs cpl of hrs to settle. Thats why its sometimes better to scale in.

David bone said...
This comment has been removed by a blog administrator.
6:14 PM

Once released off as a dead industry, it has been known as a problem on the America landscapes, and even obtained the manage "pollution on a keep."Lamar outdoor But aspects have customized with outside promotion which is going through a resurgence for both paid and PSA techniques alike