Today was a perfect example why one should use both the Notable Calls blog and twitter:

- This morning Think Equity analyst Yun Kim made a seemingly big call on TIBCO Software (NASDAQ:TIBX) saying their checks uncovered significant internal issues that led the firm downgrade their rating on the co. I speculated the call would cause a 7-10% decline in the stock and lo and behold I was right.

- Yet, after being down -10% on the day the stock started a slowish recovery until about 12:20 AM ET a fellow trader on Notable Calls Network (NCN) pinged me with the following:

Shortly after blasting the call to other NCN members I tweeted the call on twitter. As you can see the stock proceeded with a 2 pts+ recovery after Merrill Lynch/Bofa defended the name a while later and the co itself put out a 8-K denying any job cuts. 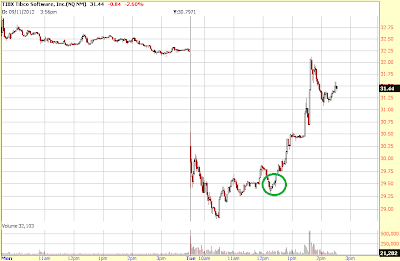 Beautiful action any way you slice it.

Join us on twitter @ thenotablecalls
Posted by notablecalls at 2:40 PM