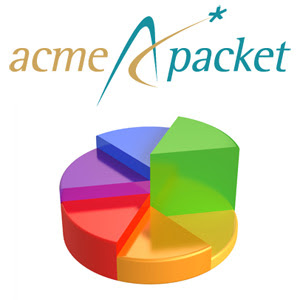 Deutsche Bank's Wireless Eq. team is making an interesting call in Acme Packet (NASDAQ:APKT) saying their latest round of industry checks have meaningfully improved their conviction on the Tier-1 VoIP Platform deal consummation for Acme in Q4.

- Firm is adding APKT to their s-t Solar Buy List.

See upside to Q4 and FY12+ view
Lack of clarity from management regarding the pending Tier-1 VoIP platform award (management guiding to sometime in 1H Q4 for closure of the deal, versus confirming the deal closure, during last week's earnings call) has been a major overhang on the stock, with bears pointing to potential for growth moderation across multiple segments of Acme's business, in addition to potential for the VoIP deal to slip into FY12. We disagree with the bear-case thesis (playing out in the stock somewhat, at current levels) and instead articulate a bullish view on Acme's Q4 and on their FY12+ growth opportunities, based on our latest checks and our view of Acme's market leadership position in the SBC market. Even a slight upside to the $93 m Q4 consensus expectation is likely to be cheered by investors, given that it represents the company's ability to successfully carry $100 m quarters in FY12+ (from an operational and sales execution point of view).

Reiterate our Buy rating
We fundamentally believe that major initiatives such as: 1) carrier VoIP platforms; 2) enterprise SIP trunking; 3) IP session recording; 4) telco and cableco VoIP peering etc., are the next phase of growth opportunities for Acme. We see favorable risk/reward at current levels (stock implying a +20% FY12 growth rate versus our +28% estimate). We reiterate our Buy rating.

Now it has given back 2/3 of that in just 4-5 months as the market crumbled and shorts smelled blood in form of AT&T's VoIP platform delays.

The management did a terrible job explaining (or rather not explaining) the delays around last qtr, causing another 20% haircut in the stock price.


Yet now we have Brian Modoff from DBAB saying his intel points to AT&T contract coming through. Also, the SBC business appears to be running strong.

This is a gutsy call. He must know something.