Financials: Do or Die?

One of my smartest hedgie contacts just pinged me about the financials. According to him it seems to be getting pretty close to do or die for them:

# After hitting four-and-half-year low last Monday, the S&P 500 Financials index has staged a sharp rally on the back of the JPM/BSC deal, various Fed actions and the partial lifting of excess capital requirements on FNM and FRE. As of right now, we are up 16% from last Monday's trough.

# Since the current financial sector bear market started from the index's all-time high in February '07, there have been two major "bear market" rallies: the first was the late November/early December '07 move of 13% off the then-lows (red annotation in the chart below); the second was the 16% move in late January when the Fed surprised the market with the intra-meeting 75bp rate cut (green annotation). In both cases, the rally ran out of steam after hitting mid-teens gains, then we sold off to new lows

# The big question now is whether the latest rally of 17% fits the pattern of the previous two -- in which case we're close to hitting the limit of the current rally and would sell off sharply again -- or whether there is a better underpinning this time around, allowing the group to add more upside from here and hold the gains

# There are undeniable supports in place now (noted above -- the most important of which are the several aggressive Fed measures to add liquidity to the banking system) that were not there during the previous rallies and these have put in place a stronger basis for investor confidence. However, against these are several key negatives that for now are likely to act as a cap to a more durable rally: 1) credit deterioration is still worsening and revenue for banks and brokers is still slowing, leading our analysts to believe that earnings estimates are still too high; 2) housing price declines remain severe; 3) as noted by Scott Peng (Citigroup) in his comments this morning, fixed income market liquidity remains very poor despite the Fed measures; 4) also as per Scott, market risk seems to be transitioning, not receding completely, partially away from banks/dealers and more toward hedge funds as some very crowded trades from this cycle start to get unwound (see Rich Salditt's email wrap-up of Peng's comments) -- this carries potential major headline risk

# Bottom line: while there are reasons to be less negative, the issues cited above suggest it's too early to put on a big upside bet in financials on a one- to two-quarter view, especially considering the 16% move we've already seen off the bottom. Expect continued volatility, although probably less than we've seen the past couple of quarters, with a decent likelihood of a near-term retrenchment after the big moves of the past few days even if we don't necessarily revisit the March 17th low on S&P 500 Financials. A couple of names on the long side that seem well suited to the current environment: SCHW and GFIG, both of which have the potential to deliver stronger than expected earnings, have very limited exposure to current problem areas and have lagged recently in share price terms. Names that look vulnerable on the downside: FHN, WFC and JPM, all of which have rallied sharply and valuations look extended versus the earnings outlook. 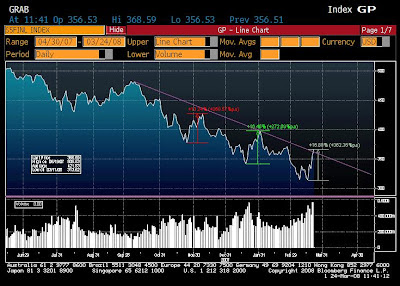 Posted by notablecalls at 2:45 PM