- Around 2:00 PM ET members started pinging me re: Teavana Holdings (NYSE:TEA). The stock was spiking on moderate volume and noone knew why. Something was clearly going on..

- Around 2:09 PM ET a senior NCN member sent me the following:

There it was. Atlanta Business Chronicle's Urvaksh Karkaria was out with a piece saying Starbucks was about to acquire Teavana, according to his sources. The piece had been sitting there since 1:48 PM ET.

I quickly blasted the the link to our 300+ Notable Calls Network (NCN) members.. 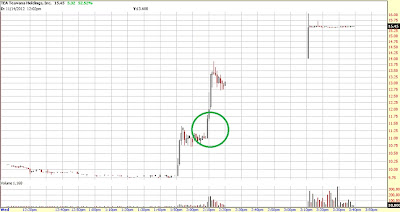 - As you can see from the chart above the stock started spiking as the link circulated trading desks. Several hundreds of thousands of shares were bought.

We broke this one first. It's tough out there. Calls like this help.


This is how Notable Calls Network (NCN) works - sharing the flow. We catch them every day.

Not all calls are this good (we get many wrong as well) but NCN is for the pros. You decide which calls to take and which one's to leave.

Want to be part of NCN?

It's easy. Just shoot me a brief email that includes a short description of yourself and your AOL nickname.

Please do note that contacts via IM are limited to people with:

I will not accept contacts from purely technically oriented traders, penny stock fans or people who have less than 3 years of experience in the field.
Posted by notablecalls at 3:50 PM

stock tips said...
This comment has been removed by a blog administrator.
1:28 AM

Recommend This site is the best for you.
Thank you for your interest