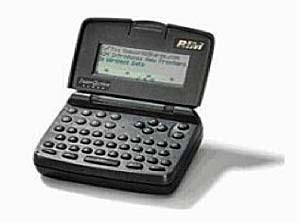 Jeffco's Peter Misek is upgrading Research in Motion (NASDAQ:RIMM) to Hold from Underperform while raising his target to $25 (prv. $22).

- I would probably have ignored the Hold rating from Misek but going over Marvell Tech's (MRVL) conference call transcript I noticed two interesting tidbits:

* MRVL was calling for RIM revenue to stabilize in H2

* Sehat Sutardja Marvell CEO had the following comments on the conf call:

I think investors should not discount RiM. We continue to work closely with RiM in delivering new solutions. They will make the product to look really, really nice, better performance as well. So, don't discount that. Don't discount RiM at all.


Here are the details:

We believe the share price has finally found a floor after months of misexecution, delayed products, and shrinking market share. Our reasons for the more positive view are: 1) patent values based on recent transactions point to higher sum of the parts; 2) build plans have stabilized; 3) focused on releasing QNX before expectations; 4) removal of WebOS. We are upgrading RIM to a Hold from Underperform and raise our price target to $25.

New value for patents: Based on the recent MMI acquisition by GOOG, Nortel acquisition by the consortium, and stock price activity of IDCC, it is clear there is significant interest in the market for patents. By our calculation RIM spent over $5B in acquiring and developing its patent portfolio but we RIM could monetize its patent portfolio for approximately $2B since many of the patents are uniquely security-related or cross-licensed.

Build plan stabilization: our checks indicate that builds plans have begun to stabilize.

Rush to release QNX: we believe that RIM will likely dump features to release new QNX based devices before expectations. While it may not be the superphone we hoped for, we believe it is slightly positive as it demonstrates to investors the ability to execute on time. Chance to become third ecosystem increased: The removal of HP WebOS as a competitor increase the low probability that RIM as an ecosystem vendor may recover.

Blackberry Music Service: RIM is seeking to leverage the popularity of BBM by integrating a music service. According to CNet the company has already signed a deal with at least one of the "Big 4" record labels. We believe this is awfully late relative to competitors, but given the popularity of BBM, it may help the company gain more traction with the consumer market.

Notablecalls: Misek turned negative on RIM at the end of April when the stock was still trading in the high $40s, slashing his price target way below the Street average. If my memory serves me correct his $22 price target was the Street low. Until this morning that is.

Bernstein's Ferragu & Misek were the two notable bears in RIM. Now both have told their clients to cover.

I think this coupled with the MRVL CEO comments, upcoming QNX launch and low expectations could produce a bounce in the name in the n-t. Barring a general market crash of course.

Needless to say, executing the trade will be difficult.
Posted by notablecalls at 7:23 AM

Hi this is Larry, Tone's friend. I'm a big fan of yours and check your blog daily. Keep it up, cheers.

hey Larry tell Touareg its not really a car.

Thank you for very good blog about Forensic Accountants. It's very nice.

This is a wonderful article, Given so much info in it, These type of articles keeps the users interest in the website, and keep on sharing more .