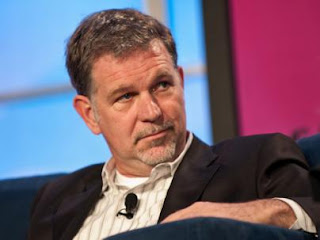 While most of the analyst community is quite supportive of Netflix (NASAQ:NFLX) following last night's earnings release, Tony Wible from Janney is slashing his rating to a Sell from Neutral with a $170 fair value (down from $175).
According to the firm, they are downgrading NFLX to SELL, as they believe it will be increasingly more difficult to support its high valuation in the face of headwinds tied to Usage Based billing, a deceleration in sub growth, and an increase in competition that will likely trigger an increase in content costs and SAC. Furthermore, they are troubled by the company’s streaming cost accounting and its limiting of disclosures in this increasingly volatile environment. While a forthcoming Facebook application and international expansion can fuel more optimism, they believe Facebook is working with multiple IPTV platforms and believe international expansion will be more difficult than expected.

- Downgrade to SELL - Janney sees NFLX facing more headwinds tied to: 1) Usage Based Billion; 2) competition; 3) SAC pressure; 4) content cost accounting; 5) the deceleration of US sub growth; 6) rising content costs; and 7) the limiting of key disclosures. They believe the lack of full year guidance, the lower than expected 2Q11 guidance, and the incrementally lower Canadian sub growth contributes to these concerns. On balance, they believe it will be more difficult for NFLX to sustain its premium multiple in the face of these factors.

1Q11 Recap - NFLX reported EPS of $1.11 (+88.5%), beating their and consensus forecast of $1.07 (+81.2%). The earnings beat was in part due to higher than expected revenues ($719 vs. $705 million forecast) and lower fulfillment costs. Net additions of 3.55 million were on the high end of forecasts while ARPU of $11.97 (vs. $11.69) benefited from the recent price increase. NFLX also saw a sharp improvement in profitability, repurchased shares, and committed to more originals. On the negative side, churn of 3.9% and SAC of $14.38 were higher than expected, while international growth was lower than expected.

New IPTV Entrants - Well capitalized players are building IPTV platforms that will transition NFLX from an ideal competitive environment to one that could trigger an increase in content costs and SAC. They believe HBO Go stands to be a more formidable threat and expect competition with AMZN, GOOG, AAPL, TV Everywhere, and DISH to intensify. DISH’s distribution capabilities, content rights, tenacious management, and balance sheet should turn Blockbuster into a more formidable competitor.

International Growth – Canadian sub growth was lower than expected and actually saw a sequential decline in net additions, unlike the US. This could be a new seasonal pattern but it could also be a sign of higher churn tied to UBB or a drop in free sub conversions. The firm would note that UBB in Canada has recently forced NFLX to significantly reduce the quality of its video streaming in the country and that Canadians are trying to impose local broadcast regulations on NFLX. They believe these unique factors in Canada are symbolic of various hurdles NFLX will face in international markets. On balance, the firm believes international growth will not scale like the US and that the competition will be more intense.

Disclosures – Management is no longer providing certain key sub metric statistics (e.g. Bay Area penetration) and has limited the amount of guidance relative to prior quarters. The company does not disclose free subs or international churn and plans to stop disclosing US gross subs addition and cancellations in the near future, which will eliminate investors’ ability to track SAC and churn. Janney would note that churn has recently increased YOY after adjusting for the massive spike in free subs, which undermines the bullish theory that churn will trend down with more streaming offerings. They would note that management also stopped identifying the source of question on its earnings call, allowing it to more easily bypass difficult questions. They also note that their questions were not addressed on the call. The firm believes this backdrop increases the risk in NFLX and should justify compression in the target multiple.

Notablecalls: What bothers me the most about NFLX is the way they are starting to limit disclosure of key metrics. This may help them in the n-t but it will come back to bite them in the arse some time in the future. Some time in the future they will have a hiccup and the analysts will have nothing to work with to defend the stock. Hence the possibly compressed multiple.

But should one short the stock here?

Sure, if you have a death wish. NFLX is now an international expansion play. Sky's the limit, right?

This could be very important to the long term success of this company's streaming service business model:

It seems people are recording the streaming Netflix movies (illegally, of course) to their hard drives and probably sharing them with others besides.

If you simply google "record netflix streaming movies" you will find the above link and other ways that people are currently pirating the streaming movies from NFLX and HULU as well. Why has no one mentioned this in the financial news for this company? Wouldn't this be seen as a major flaw in Netflix's streaming content business model? Wouldn't the owners of this copyrighted material be upset to know that it's so easy to copy these movies now, unlike the very strong copy-protection on the physical DVDs?

eToro is the #1 forex broker for newbie and professional traders.