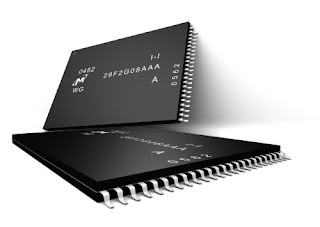 Avian Securities was out with some interesting comments on the NAND market on Friday:

We shifted to a negative view on MU and SNDK two weeks ago. Additional data points we have encountered since our change in opinion have only reinforced our cautious view on the memory space. Specifically, evidence of additional expected NAND wafer starts as well as data suggesting further acceleration in NAND process transitions has caused us to increase our estimates around bit supply growth in 2011.

Additional data we have encountered suggest further acceleration in NAND supply than the street has modeled. Our bit growth assumption are now for 101-120% bit growth while street estimates are for 80% bit growth. Second point, the street anticipates avg. of 40GB of NAND in new tablets while ex Apple we are seeing a MAX of 32GB but our checks indicate only 16GB or less of NAND. Bottom line is much more supply coming online than anticipated and demand side could be too high as well.

Additionally, negative data points around non Apple tablet penetration as well as stabilizing memory content have led us to question whether consumption of NAND will be as robust as we had previously expected. Thus, we believe potential for forward pricing pressure is increasing as the gap between 2011 NAND supply and demand projections grows wider. In light of further deterioration in our outlook, we are reiterating our negative outlook for SNDK and MU.

The transition to 2xnm is accelerating with MU/INTC leading the way in 2010 and 11.

INTCs decision to reduce investment with MU potentially opens the door for a new capital infusion partner in IMFS.

Notablecalls: Avian guys are good, very often ahead of the curve. I thought you would enjoy their recent views on the NAND space.

(If you're dabbling in the NAND/HDD space, you should check them out.)

It's worth noting, Avian was uber bullish on Acme Packet (NASDAQ:APKT) since single digits. What a ride guys.


Disclaimer: I have no affiliation with Avian Securities.
Posted by notablecalls at 2:44 PM

I am the guy who replied to the "Straits of Messina" piece you did last April. In that piece, the analyst suggested that Sandisk would make $2.41 in 2010, while the consensus was at $2.71, and I was between $4 and $5. It turned out to be $4.60. You cite their call on APKT (a company that has nothing to do with NAND) as grounds for their credibility, so I offer that to establish mine.

1. Avian says that they think bit growth will be 101-120% in 2011. Well, Steve Newberry of LRCX just said in their CC that he expects 85-95% bit growth, and they are higher than the vendors' own estimates (MU for example has said 70-80%). I have to believe that Newberry, as an important equipment supplier to every NAND vendor, has a good handle on that.

2. He makes numerous assertions about NAND capacities in tablets--"our checks indicate only 16GB or less of NAND" ex-Apple. Well, aside from the fact that Apple currently dominates tablet sales, that is mildly absurd. These things are going to record 1080 video and have 5-10 megapixel cameras, but only 16GB of storage? They better have card slots for additional storage, if so. The cards, as a reminder, use NAND.

3. Avian says "demand side could be too high" (my ital); yeah, sure. And it could, as has happened since the iPad went on sale, also surpass current estimates. Sure, most of the non-Apple entrants won't make it. But most of the vendors won't just stop making new versions either. They will retool, and come out with new versions--the potential market is just too large and too important to just cede the tablet space.

4. Avian says, "Smart-phone embedded capacity shrinks as Android outpaces iOS." Well, good grief, non-Apple smartphones try to compete by outspecing Apple. "We gotta better deal--twice as much storage"--and that amount will increase as the price of NAND goes down, which it certainly will. Plus Apple is now planning to come out with a cheaper iPhone to address the lower priced market. And so-called "feature phones" becoming extinct as more people want their phones to do--and "remember"--more things. But--

5. The price of NAND hasn't come down. Q1 is seasonally a weak quarter for pricing, but so far, despite projections to the contrary, pricing has remained firm to slightly up, in both spot and contract pricing. Even normally bearish inSpectrum just came out with a cautiously bullish report on it, although they say they doubt its "sustainability." Of course, since inSpectrum has been bearish for a long time and been wrong, maybe they are a contrary indicator.

(continued in next post--apologies for making this so long).

6. He is right to say that a lot of new supply is coming to market in 2011. Most of it will come in Q3 and Q4, though. And he conspicuously doesn't even mention SSDs. SSD sales have started to simmer--and when the 2x node becomes more common, and pricing really does begin to slide, they will become even more common. It is astonishing to me that there is no mention of it when he is talking about supply.

7. Just as conspicuously, he fails to mention Toshiba/Sandisk. He claims that MU/Intel is "leading the way" in the transition to 2x. It is true that they were the first to announce, and the first to market with it. But their quantities are still relatively small, which is one reason why MU and Intel still have single digit market shares and have not been gaining on the leaders, with Samsung and Toshiba/Sandisk each having high 30 percent shares.

8. Micron doesn't have Intel's help in IMFS; Avian spins this by saying that it "potentially opens the door for a new capital infusion partner in IMFS." Good grief--and who would that partner be? Hynix creditor/owners have been trying to find a buyer for its operations for well over a year now; no one wants to get into this business, however booming it is. The reason is that it is a duopoly, with both of the leaders being extremely strong financially and technologically. It is difficult to make NAND. The DRAM producers who tried to break into the market a few years ago found it impossible to do it profitably. Intel was only mildly profitable in NAND in H2 of last year as per their CC, despite the fact that that was an incredibly strong market (why do you think that they aren't participating in IMFS?), while Sandisk and Toshiba both made strong profits in NAND. Micron will remain a second tier player in NAND, along with Hynix. The duopoly will continue; no one else will be entering this space. The barriers to entry are simply too high, contrary to those who persist in sneering that NAND is "just a commodity." NAND, as Eli Harari said on more than one occasion, is not DRAM. They are very different products, and the two spaces have very different structures. This is very poorly understood, probably because it is certainly true that they have many similarities.

8. Which brings me to the last point--Avian says "Continued expansion in 2012 will add 200k+ WSPM as Samsung begins to flex Line 16’s muscle." Well, that is a favorite line of people who are bearish on NAND (usually that means Sandisk, since they are the only pure play in it). As if Samsung will destroy its competition in NAND like they did in DRAM. They ignore first, that Samsung already tried to do this a few years ago and while they did essentially drive out the Taiwan wannabes, they didn't drive out Toshiba/Sandisk (although they did weaken Sandisk). Second, that Samsung pays royalties to both Toshiba and Sandisk. Third, that technologically, they are inferior technologically to Sandisk and Toshiba in NAND. And fourth, it is already a duopoly; who else are they going to push out? There may have been some justification for their past market share grab in 2006-07, when the Taiwan DRAM players were trying to edge into the market. But that is no longer the case. Micron is no threat; their new fab will have a capacity of about 100 wpm, not enough supply to push them into Tier 1 status.

Avian says that there will be 200k+ wpm in 2012; well, that is likely, but it is also very likely that 2012 will be the Year of SSDs like 2011 is the Year of the Tablet. And, news flash, SSDs will eat up a whole lot more capacity than tablets. Price elasticity will rule--As NAND ASPs come down, more computer vendors will be using SSDs in their machines, and more consumers will opt to buy them. Any NAND supply glut will be temporary for at least the next few years as SSDs become the norm.