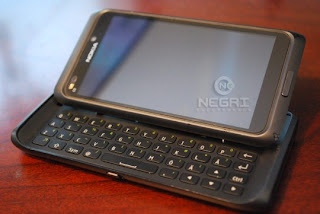 - Morgan Stanley is reversing their very negative view on the finnish mobile phone maker upgrading their rating to Overweight from Underweight with a EUR9 price target (prev. EUR6.50).

Latest channel checks suggest that N8 volumes and ASPs could surprise the market; They raise forecasts and upgrade to Overweight with a price target of €9. Firm's 2011EPS is now EUR0.73, up 16%.

Although Nokia still has plenty to improve and macro concerns have resurfaced, MSCO's recent checks indicate Nokia’s next flagship product, the N8, is off to a good start. This could imply that earnings have now troughed. In fact, their raised 2011-12 EPS are now >10% above the street. Firm's bear case also looks less likely now and, with the stock pricing in plenty of negatives, they think the risk-reward has turned positive. Hence, they doubleupgrade to OW with a PT of €9, implying 25% upside.

The N8 could halt the ASP fall. After many delays, the N8 is ready to launch. Checks suggest strong order intake from operators (>200k/week) at a lower discount than feared (€350). This implies 2011 ASP could grow for the first time since 2000 and – if sustained – drive positive EPS revisions. In addition, with MSCO's proprietary Euro handset survey pointing to surprisingly high brand loyalty, the N8 could help Nokia deliver on its traditional 4Q market share regain, which they estimate could increase to 34.5%, up from 33% in 2Q09.

Plenty of near-term catalysts, with the launch of other Symbian^3 devices and the accretive acquisition of MOT’s network business. Although the macro remains a worry, MSCO thinks the demand for smartphones is healthy.

MeeGo – a free option. Symbian^3 is only a short-term fix as it still lags the Android and iOS operating systems in the high end. Hence, to regain long-term sustainable competitiveness, Nokia will have to deliver on its MeeGo promises. It remains too early to tell, but we think that Nokia will either deliver here or strategic changes may be made – either of which could be positive for the stock

MSCO notes they remain well aware of Nokia’s long-term issues, particularly with respect to its high-end operating system and developers’ ecosystem (July 21 note Value Play or Value Trap). However, with the stock having lost c75% of its value since the end of 2007 and 2011 consensus EPS forecasts now c60% below their 2008 levels (as expected in end of 2007), they think MeeGo is now a free option. In fact, the likely near-term positive news flow they describe in the call could drive positive earnings momentum, which could be a powerful driver for the stock. Trading at 8.5x their 2011 EPS ex cash (€1/share), they think the risk-reward has turned positive.

Market remains sceptical ahead of Nokia World Nokia’s main global customer event, Nokia World, takes place in London on September 14-15th. Merrill thinks it would be odd if this customer-focused event did not see some new product launches at, or ahead of, the event.

Android driving Nokia pessimism?
Google cites 200k Android activations per day, a 70m run-rate (vs 2010E 100m Nokia smartphones). Android strength is seen as another nail in Nokia’s coffin. But this is not really “new” competition, coming now from Nokia’s traditional competitors Samsung, Motorola, and Sony-Ericsson whose Android based smartphone portfolios are replacing in-house feature-phone platforms. Nokia, like Apple and RIM, retains control of its platform but desperately needs an updated portfolio to show it off.

Low expectations
Judging by calls into their team, Nokia seems to have been a favourite case-study for undergrad interns working at London investment firms this summer. A kneejerk and understandable opening viewpoint is that Nokia is dead. You can’t see any attractive smartphones in their line-up (see Carphone Warehouse UK listings in next section) and each month sees more Android based phones appearing. Meanwhile iPhone dominates the very high end.

Nokia now has no competitive touch products above a $300 ASP. Perhaps even above $200. Nokia sold fewer than 2 million N-series phones in Q2 (even that level of sales is a surprise given the portfolio). The absence of high priced, high margin product explains why the company is expecting Q3 to be its lowest margin quarter since it began volume production of handsets.

Where can Nokia go from here? There is almost no high-end phone business at Nokia to sink further. What they think is missing in the market’s negative expectation is an understanding of how low things have sunk for Nokia already. Nokia’s smartphone ASP is lower than Sony-Ericsson’s and Motorola’s entirev handset range ASP. Even a small improvement in the smartphone portfolio can move the ASP and margin needle. We have already seen this at Sony Ericsson (ASP now +48% above its 2008-10 low point) and Motorola (+117% in € terms).

And that improvement, relative though it is, is now certain to come in their opinion. Merrill believes the N8 will sell better in Q4 than the N97 and N97mini and X6 in preceding quarters.

Merrill models operating margins returning to the previous lows seen in 2004-2006. And gross margin remains a shade below 33%. This is what is required to see 2011 EPS 50% above current consensus. True, there is always room for things to get even worse, but they are not forecasting a return to Nokia’s golden days by any means and risk-reward looks attractive, in Merril's opinion.


Notablecalls: It's been years (!) since I have read anything remotely as positive on Nokia.

Now in addition to the above, consider the following:

- Apple's market cap is now ~10x larger than Nokia's. Yet, their revenues are almost identical. Makes you wonder what would happen to Nokia's valuation if they could push their margins a tad higher, doesn't it? Go and read again what Merrill thinks is required to push 2011 EPS 50% above current consensus.

- If you like this N8 model, check out E7. I suspect this could be a way bigger product for Nokia.

- Meego could be unveiled soon. The Nokia/Intel Linux based operating system has gotten some surprisingly warm reviews.

- Morgan Stanley has the following to say:

Short interest base is high: Nokia’s issues are well understood, we believe, resulting in Nokia being a crowded short. Any positive news flow/ announcements could result in a short squeeze.

All in all, it seems Nokia is set to move higher in the n-t. I would not be surprised to see $10 in a week.
Posted by notablecalls at 5:50 AM

I think a change of the CEO at this time could result in a positive for Nokia's stock price. How many more quarters of disappointing earnings news, and no evident real change in its operations could this company sustain. It all starts at the top and which is why we continue to see awefull results on the bottom line.