UBS is making a rather big call on Sandisk (NASDAQ:SNDK) downgrading the stock to a Sell from Neutral with a $18 price target (unchanged).
Expecting peak demand by mid-C4Q to limit further ASP appreciation
With NAND spot/contract pricing up 24%/9% in Q3 and holiday product builds typically complete by mid-C4Q, they downgrade SNDK to a Sell rating based on:

1) negative price elasticity that could limit the potential upside to earnings as a result of higher NAND flash prices leading to weaker unit or total bit capacity sales, 2) the approaching seasonal demand peak in October/November that could lead to weaker NAND flash ASPs starting in December, and thus serves as a negative catalyst for SanDisk shares given that it historically has tracked memory prices, 3) potential gross margin downside risk from the company’s royalty revenue stream which will see a pronounced decline starting in the December 2009 quarter and again in the March 2010 quarter due to new Samsung royalty rates taking effect, and despite ongoing manufacturing cost reductions that should help to maintain or improve gross margin especially in a benign to improving price environment. Furthermore, SanDisk is also on track to move back to a more balanced fab-lite model where 25-30% of bits are sourced from external suppliers and thus could limit the upside to margins in coming quarters.

Greater exposure to retail could limit bit shipment upside
Whilst UBS does expect SNDK margins to improve meaningfully in 2H09, retail card sales could be negatively impacted by higher prices or fewer promotions. Relative to peers, SNDK has low embedded NAND exposure in high capacity smartphones (16GB or higher), a product that the firm believes is driving much of the demand strength in Q3 and similar to late Q1/Q2. Though industry supply growth is moderate, Q1 demand seasonality is likely to be unsupportive for ASPs.

GM upside could be limited by new royalty rate, non-captive mix growth
They believe GM upside offered by higher prices and cost reductions from the 32nm migration could be partially offset by the effects of lower Samsung royalty rates, which have a partial quarter’s effect in Q4, and the shift to a more balanced 30% non-captive bit supply mix in coming quarters.

Seasonal Demand Peak Approaching
The manufacturing of products slated to be sold during the late November through year end holiday selling season typically concludes by late-October to mid-November and typically coincides with the peak in NAND flash price appreciation. Based on DRAMeXchange data, the NAND spot ASP M/M % change in October over the past 5 years was -5%, and compares to the up +9% seen in 2009 thus far. In the two month period ending in November, the 5-year average shows a -14% decline while the three month or quarterly Q4 average over the last 5 years is a -25% decline. 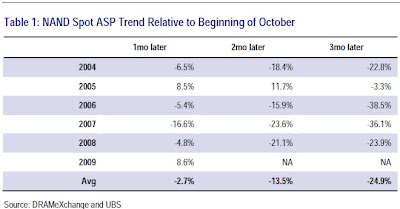 2005 was the last time ASP trends were up in October and the 2 month period ending in November. That period was marked by the strong growth of portable media players as a new demand catalyst, but seasonality still quickly came into play by December leading to a Q/Q ASP decline of -3%. UBS expects a similar trend to play out over the remainder of 2009 given that retailers are likely to not build significant amounts of inventory and the ramp of new smartphone products is likely timed to coincide with holiday launches and sales promotions.

Valuation: $18 12-month PT; Downgrade to Sell Rating
UBS' DCF-based PT of $18 is equiv to 1.3x P/BV. Sell rating. SNDK trades at a P/BV of 1.4x or consistent with a more normalized mid-cycle range.

Notablecalls: So, UBS is pretty much the first one to say the current upswing in NAND pricing is not going to hold. Pricing gets better so Samsung & others will up their production pushing pricing down again. The endless cycle.

They are probably right and will look cool with their Sell rating in a few months.
Posted by notablecalls at 8:25 AM

make my day and send me your picks in ADVANCE. Just for once.

via email for ex.